Over the past 10 years, we’ve had the privilege to assist hundreds of organizations in their Change initiatives.
What if we could use this experience to uncover common insights on what makes change successful and provide benchmarks?

We decided to look in detail at the most frequently “best shared”  opinions and ideas (what we called the synthetrons) about the change process across multiple online dialogue sessions to uncover fresh insights on what makes change successful (see methodology below).

Screening through these key messages, we identified some systemic recurring Change drivers that we categorize in an anthropomorphic manner: Head, Heart and Hands (3H).
We learned that in change people need to be convinced of the rationale of change, to analyse and to think about it (Head), they also need to believe in it, to be to be emotionally drawn to it, to be aware of the associated behavioural and cultural changes required to make it work (Heart). Finally they consistently talk about the capability to implement it by having at their disposal the necessary means, resources and tools (Hands). That is how our 3Hs model was born.

Our 3H’s model in a nutshell

1. Change needs focus on all 3 H: Head, Heart and Hands.
We did not have one single dialogue in which all 3H were not present in some way. People always talk about the need to buy into the rationale, be convinced by the necessity / believe in the way forward but also want to be able to make the change happen.

2. “Hands” – the capability to make the change happen – requires the most attention. 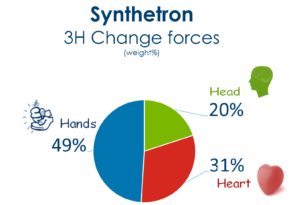 About half of the comments associated to Change is about Hands, 30% is about Heart and 20% about Head. “Hands” is from management point of view less sexy, but Hands is linked to the daily reality and is what counts for those that have to live the change and make it happen.

Deviations from the benchmark (average weight out of database) are surprisingly small. When we noticed an under representation of one of the 3H change drivers, content analysis taught us that this was mostly the result of the bad “performance” on one of the Hs for the organisation concerned.

3. Underperformance in one of the 3H change force is like having a hand break on.
You simply cannot compensate the underperformance of say the Heart – the behaviour part, role modelling – with overcompensation of the Head – explaining why the change is important – as people may understand you but not believe you. We worked once with a manager who had spent lots of effort in explaining the change story, the rationale part. He really went out to the field, had town hall meetings, bulletin boards, newsletters etc to explain that from now the company would focus on market A. But because the incentive system was still remunerating results in market B more than in A, nobody believed him and additional effort would not have helped. The motivation was simply not there. When the systems, processes, investment in competence (Hands) are lacking the people may be convinced or even engaged, they simply miss the capability to make it happen.

4. Inconsistency is a killer, people in change instantly spot inconsistencies
We see so often that when a manager is not walking the talk (Heart), people stop believing him/her and gradually alignment is eroded.
Similarly we had a case where the strategic/change direction was unclear (Head). The CEO was focusing on culture change and new behaviours, and lots of activities were set up, creating positive energy and engagement. But as his management team did not understand what direction they were supposed to go, as the CEO did not make the strategy explicit (Head), people were not aligned. Despite all engagement effort the organisation was not moving forward.
When the systems, processes, investment in competence (Hands) are lacking the people maybe convinced or even engaged, they simple do miss the capability to make it happen.

5. Phasing 3H change effort is counterproductive
Classical phasing is about first telling the change story, then organising events to get people motivated and then expecting them to go and change/ implement.
While the 3Hs on average have a different weight depending upon the stage in the Change initiative (planning, implementation, debrief ), it is however clear from our data that all 3Hs need attention from start to finish. People want to also feel (Heart) the change when they are told things need to change. They want to be kept reminded in the middle of implementation what big project they are contributing to (Head). They want to see what investment (Hands) is going to support the change right from the beginning.

6. Hands is about more than material stuff: it also includes people’s capabilities
Hands is about processes, budgets, systems but also about people’s skills and capabilities. This includes the classical training, building competences, freeing up time, finding the right profiles, but also working on the stamina, energy, ability to motivate oneself for the next change.

How did we build the 3H model?
We built a fully anonymised database to be able to quantify, qualify and research further the key drivers to make change successful. This database today encompasses more than 21,000 “synthetrons” (these are typically the top 15% most important ideas identified by the participants during the online dialogues) covering over 200 sessions organised on behalf of 50+ companies.

Today our consultants use the 3H model to help our clients benchmark their change initiative and identify key priorities to be successful.

In our next newsletter we will share you more insights from our 3H/EBC research on three different change levers that complement the model: “Enabling”, “Blocking” or “Critical”. 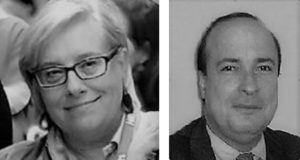