Innovation during virtual times at the Dutch Ministry of Justice

How an interactive virtual meeting with 150 managers made innovating in times of crisis possible for the Dutch Ministry of Justice.

One need that the Corona crisis of 2020 accentuated was a need to innovate. Organisations were doing that before already, but this crisis forced them to innovate double as fast as and adapt to these changing circumstances, as day-to-day practices evolved because of homeworking.

The challenge then, for most companies, was to find a way to move forward with innovation while being unable to meet physically and host big innovation sessions with their different teams…

One organisation found a way to innovate effectively with their virtual teams. The Dutch Ministry of Justice had already leveraged Synthetron for the first time at the beginning of the Corona crisis to get in touch and connect with their people suddenly isolated and working from home. After being very pleased with the results and dynamic it had created in their teams, they used it again and turned it into a powerful tool for virtual innovation.

It all came together nicely for the organisation. They had been working already on a leadership program and a change program when the Corona times hit. At this point, they found it important to share experiences around innovation with their top managers to be able to learn quickly from each other in an open setting.

Innovation was the most important objective. There was a clear need to innovate and share ideas that could immediately be adopted and implemented by the managers. In order to achieve that, it was decided to organise a virtual meeting with all the managers from all the departments and combine Synthetron (the discussion and co-creation part) with Webex (to introduce, present and conclude the meeting).

The meeting was divided into 3 cycles, one per presented innovation initiative. All cycles were built as follows;

This cycle was repeated 3 times and followed by a general conclusion to the meeting.

Many ideas have come out of it. It was a big step forward for identifying ways to improving processes across the various departments, and this in just over an hour!

The biggest added value for the organisation was that Synthetron makes it possible for the them to use a videoconference tool like Webex alongside our e-dialogue platform. This allows to start with a “one-to-many” format, then swiftly enter into separate conversations in the “many-to-many” format to go deeper, share innovations and learn from all participants.

The most well-known videoconferencing tools like Zoom and Webex just don’t have a good functionality when it comes to allowing people sitting behind their computer, usually taking a passive role, to take a pro-active role by sharing and ranking their insights and opinions with those of others. By adding Synthetron to the mix, the organisers could let everyone speak, react, debate and find out relevant insights that, after just one hour, they could put forward and react on with Webex before concluding with concrete next steps.

The Synthetron consultant working on this case concluded: “Without our tool, all you can do is get a person to give a long presentation after which you might be able to get a few people to respond, but it usually doesn’t go above 10 people. It is really more of a ‘one man show’ or a ‘few people show’. It remains limited when it comes to sharing and discussing topics. Which is essential to any innovation process.” 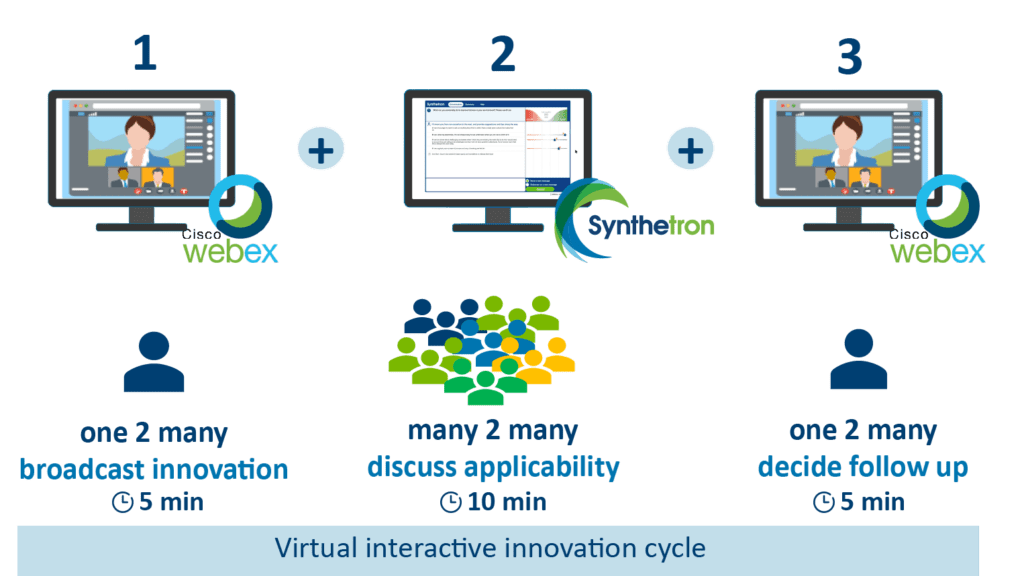 By combining Synthetron with their videoconferencing tool, the Dutch Ministry could turn two different tools into something new and powerful. Into a real tool for virtual innovation with big teams.

You want to get in touch with the Synthetron consultants who worked on this case to see what they can mean for your organization?